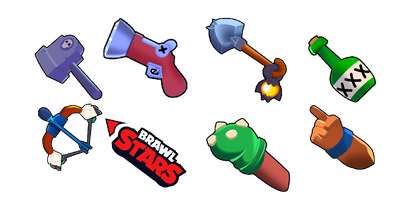 Brawl Stars is a mobile game in the MOBA genre from Supercell. Despite the release at the end of 2018, the game gained great popularity, largely due to the abundance of battle modes and colorful, fantastic heroes - brawlers.

The player has plenty to choose from - 32 unique characters and each of them has its own set of abilities and skills. Each hero also has his own passive skill, which is available through booty chests. Players can fight in several modes, for example, Reward for the capture - one of the two teams wins, who has collected more stars, killing opponents. In the robbery mode, it is necessary to break the safes of the opponents, while maintaining their own.

An interesting “Gem Grab” mode - the team becomes the winner, the team that collects the most gems wins. Well, in the Collisionmode, 10 players fight each other on the map, where the borders are reduced due to a toxic cloud. The game is replete with a colorful design that many people like, including us, which inspired us to create a separate collection of Brawl Stars cursors. There are Brawl Stars Shelley cursor, Barley cursor, Penny cursor, Frank cursor, Mortis cursor and others.