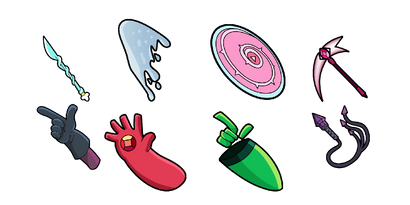 But in the fall, the American channel Cartoon Network began broadcasting it for its viewers. Since then, 6 seasons have been released. The sixth promises to be final.\ As for the plot of the animated series, it revolves around the Crystal Gems team. It consists of alien creatures with characteristic names: Pearls, Amethyst and Pomegranate. But there is another participant in it, in the role of which an ordinary boy Stephen acts. Together they look for monsters and try to neutralize them so that they do not take over the Earth for personal gain.

They are opposed by Jasper and Period - messengers from their home planet who want to defeat the Gems and turn on the Cluster. If you are a fan of Steven Universe and want to see the characters of the animated series wherever you can, install the Cursor Style extension! Why do this? You can add a collection dedicated to the Steven Universe and turn the standard mouse pointer into one of your favorite characters.