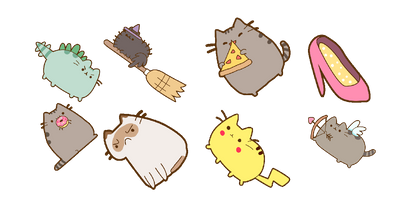 Almost everyone knows the Pushin cat. Even though it is only a character of a children comic book invented 10 years ago, he has millions of fans today. Pusheen cat appeared as an illustration created by artist Claire Belton.

A year later, the cat acquired its own page on Tumblr.com and in a few weeks gained a whole army of fans - about 10,000 people. In 2013, Facebook was eager to include images from Pushin in collections with other emoticons. After negotiations with the creator, this idea was put into practice and “blew up” the Internet! Pictures from Pusheen cat are used in correspondence more than 10 million times a day!

In 2014, one of the largest toy manufacturers in the United States turned his attention to this character. GUND (it was she who invented the teddy bears) launched a pair of Pushin models. Since the success was huge, after a few months a complete collection of toys in the form of this cat was created.

Where else can you meet the Pusheen cat? In gift sets from Isaac Morris Ltd, in marshmallows from Boomf and, of course, in our collection of Pusheen cursors!