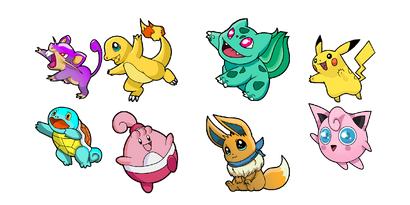 The word pokemon means a creature with supernatural powers. They have intelligence, and some of them are even able to talk. Currently, there are already 802 varieties of Pokemon.

In the invented Pokemon universe, people are called Pokémon trainers, whom they train for battles with other trainers Pokemon. And the more experienced and stronger the coach, the more respect he enjoys. Fortunately, it should be noted that Pokemon fights never end in the death of these unique creatures

All Pokemon have different abilities and differ in the type of element, and its resistance to different attacks strongly depends on this, and some creatures have the ability of two elements at once. After winning the battle, the Pokemon gets the valuable experience that is necessary to increase the level and, accordingly, its characteristics. Today, the Pokémon universe is a huge media franchise and we’ll decide to prepare for you a collection of cursors with some popular Pokémon.

Among them, the most famous is the Pikachu cursor, as well as the Rattata cursor, Squirt cursor, Bulbasaur cursor, and Charmander cursor. This list will be updated, because there are so many of them and each of them is unique in its own way.