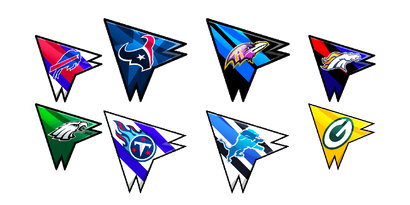 In turn, each of the conferences is divided into four divisions: East, North, South and West. The NFL season consists of pre-season games, a regular season and a series of playoff games. The final match of the NFL season is called the Super Bowl and is essentially the most popular sporting event in the United States.

This is a favorite game for millions of fans and therefore we have created a collection of NFL cursors so that you do not part with the symbols of your favorite team. Be it New England Patriots, New York Giants, Buffalo Bills or another team, always be on the same wavelength as your idols, using our cursors in the form of a team logo and helmet. The collection will be constantly updated so that everyone can change the cursor to the image of their favorite team.