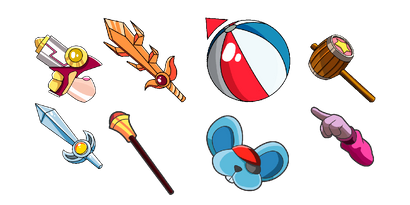 The history of the video game Kirby began already in the 90s of the last century. It consists of many series that were developed by Nintendo and HAL Laboratory.

The game is intended for children from one and a half to 8 years. Its popularity can be judged by the number of copies sold. Over 34 million worldwide. The main character of Kirby is the eponymous pink creature. It lives on a planet called Pop Star, and periodically protects it from various dangers. Kirby can breathe in some objects and his enemies in order to then learn their abilities: hand-to-hand combat, possession of a sword, fire breathing, etc.

However, the pink puffer not only fights with enemies, but also solves various puzzles, travels to other countries and can even fly in level You can play this video game on Nintendo or Game Boy consoles. In all series there are cute heroes, good graphics and funny soundtracks.

By the way, for almost 30 years since the release of the first version, the world managed to see 20 Kirby series. This indicator, coupled with the multi million-dollar volume of copies sold, helped the game to be in the TOP 50 of the most successful and sought-after video games in the gaming industry. Love Kirby so that you would like to see this character wherever possible?

Then use the Kirby collection and turn the regular mouse pointer into the main character of your favorite video game! We are sure that you will like the new look of the cursor.