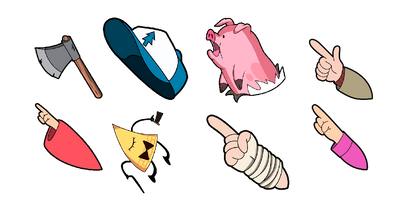 The premiere was released in 2012 and was shown on the Disney Channel. The entire first season of the animated series was spinning there. Two years later, the second season was released, which viewers could watch on the previous channel and on Disney XD. Unfortunately, Gravity Falls fans did not wait for the third and subsequent seasons. The creators decided to limit themselves to two seasons without any sequels.

As for the plot of this animated picture, then all the action takes place in a fictional city called Gravity Falls. Two twins come there, whose names are Mabel and Dipper. They are staying with their cousin Stan. He has his own tourist souvenir shop. When the brothers get bored wit doing nothing, they go in search of adventure. One of them finds a strange diary in the forest, which tells about the anomalies of this town.

The twins set off in search of its author and encounter unusual creatures and places. If you are interested in this animated series, and you were once fans of its characters, we recommend you our collection of mouse cursors in the style of Gravity Falls!