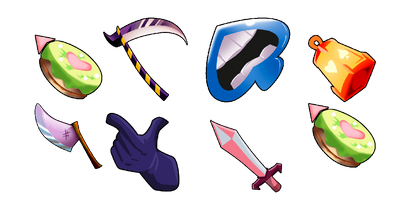 Deltarune is a role-playing game released for computers a couple of years ago. It was created by the same programmer who developed Undertale.

However, these two games are almost not similar to each other, although they have a couple of common characters and locations. There are several main characters in Delta Rune. This is a student Chris, which can be controlled, and a charming monster Susie, uncontrollable. Both characters fall into the world of darkness, where they meet one of its inhabitants - Ralsay.

He tells them that in fact they are light creatures who have a mission - to stop the flow of dark energy in a gloomy world. To do this, they need to spare the local monsters and try not to engage in battle with them, although this is sometimes quite difficult to do.

The player has a simple choice: either spare the dark creatures, or attack them. Since Susie is not a fan of half measures, in many cases she chooses a battle. Therefore, Chris has no choice but to support his girlfriend and help her in the battles.

Love the Deltarune game? Then stylize your mouse cursor in the browser for one of her characters! You can do this with our extension. Install it, add the “Rune Delta” collection and activate! Now your arrow has ceased to be the same as everyone else, and has become Chris, Susie or one of the creatures of the dark world.