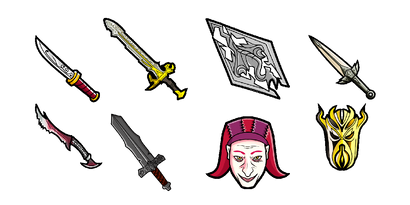 The Elder Scrolls is a series of computer role-playing games, united by a common, meticulously designed universe, which provide the player with enormous freedom of choice, allowing them to visit different areas and cities of the fantasy fantasy world and explore new places and missions on their own.

Work on the series started back in 1992 and over the years the game has united a huge community of players around itself. Therefore, by popular demand, we have released a collection of cursors The Elder Scrolls, so you can immerse yourself in the unique atmosphere of the game. The eternal battle of knights and dragons, which side are you on?

Change the cursor to a dragon and join the army of fire-breathing monsters or fight nobly on the side of people by choosing the sword cursor and the image of your favorite character - the decision is yours! The main thing is that with our new collection, you are ready for any battles.