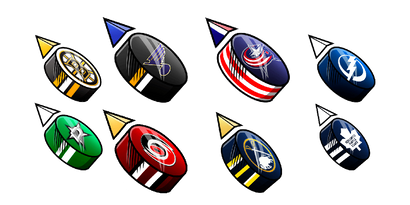 The National Hockey League was formed in 1917 - it is a professional sports organization that brings together hockey clubs from the USA and Canada. And this is one of the first professional hockey leagues in the world.

The NHL is one of North America premier sports leagues, along with the NFL, NBA, Major League Baseball and MLS. Every year, 31 teams from 30 cities in the USA and Canada fight for the main trophy - the Stanley Cup, and the team that scored the most points in the regular season is awarded the Presidential Cup.

It time for us to honor this great game by creating a collection of NHL cursors. If you also like hockey, cheer for your favorite club or participate in this sport yourself, just change the cursor and not part with your favorite team, including the Boston Bruins cursor, St. Louis Blues cursor, Columbus Blue Jackets cursor, Tampa Bay Lightning cursor, Dallas Stars cursor and other clubs worthy of sincere respect.